Renewing A Sense of Place in Far North Tulsa (McLain area and Turley neighborhoods): A Little Bit About A Lot We Do

Renewing “A Sense of Place” In Far North Tulsa 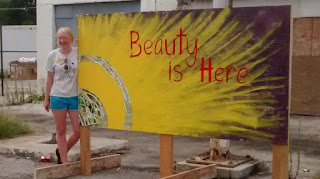 WE ARE PLACE-BASED. Our Area: The 74126 and 74130 zipcodes, especially 46th St. N. to 76th St. N. and Highway 75 to the Osage County Line. Part of the Tulsa McLain School District. Includes both Tulsa incorporated area and the unincorporated community of Turley. Also our Free Food Store serves Sperry. Our Community GardenPark and Orchard has no geographic restrictions. Some 11,500 residents in our two mile radius; three-fourths of those are on the city side. We have lost 1,000 since 2012.

OUR RESPONSES:
In 2007, four years after beginning, we turned our CHURCH INSIDE OUT and focused organization on community concerns and connections and opened up a community center with a computer center, library, clothing room, meeting space and soon housed an OU Health Clinic and began working with OU Graduate Social Work program on community forums and projects. Called it A THIRD PLACE as part of the global third places or third spaces movement of creating free public spaces to grow community sense of place and connections where people could meet and work with people who are different from them to make a difference around them, especially for us “third places” in places of poverty and neglect.

In 2009 we formed A Third Place Community Foundation as a non-faith-based non-profit, and began demonstration community garden on donated church land. In 2010 we raised funds aided by a project by the OU Graduate Design Studio, to buy the block of abandoned neglected burned out properties and illegal dump site across from where our demonstration garden was located, and with federal stimulus funds we began clearing it; that year we also bought a large abandoned church building to move the community center into for expansion. In 2011 as the OU health clinic closed with us, we began working with OU Graduate Social Work intern and classes to develop a lay health worker plan that would use our residents mentoring our residents who go to the emergency room the most, and the “medical mentors” would be trained by OU community medicine residents but funding never came to initiate the program. We shifted to become a “Social Determinants of Health Clinic”

In 2011 in our new space in the old vandalized church building we expanded our programs for the community center meeting space, free bookstore, computer center, art room, clothing and more room, and expanded our food pantry and store. We hold community festivals in both the Center and at the GardenPark and Orchard.

In 2011 we won an online contest for the community orchard; and we received a federal home loan bank grant for our park site preparation. For the past five years we have been living and growing in and adding to both of our properties, as well as working on blighted areas in the community.

We are more than our statistics. We have strengths and spirit, and beautiful land, and people helping people in many ways. But, also….

1.     LIFE EXPECTANCY GAP DRIVES OUR MISSION. 74130 dies 14 years sooner than 74133.  74126 10.7 years sooner. We and others are making a difference; when we began our missional transformation in 2007, the gap for the 74126 was 13.8 years. Life expectancy studies reveal 10 percent comes from clinical treatment (we have worst health care access rates), 20 percent comes from genetics; that leaves 70 percent of the impact to come from lifestyle choices (50 percent) and environmental factors (20 percent) much of which contributes to the capacity to make good lifestyle choices of eating healthy and exercising, staying off addictive substances: wild dogs, lack of sidewalks and streetlights, neglected properties, illegal dumping, healthy food desert, poor transportation, crime, poverty stresses, too poor for health insurance, etc.)
Unemployment numbers are double the state average. WE MOVED FROM HOSTING HEALTH CLINIC TO BECOMING A SOCIAL DETERMINANTS OF HEALTH CENTER.

4.  We connect with and serve and serve with some 1000 of our neighbors monthly through our food store, gardens, community center and art day events, and various local justice coalitions (advisory boards for health dept, park, neighborhood partners, pre-release center, schools) of the 11,500 in our primary service area. Our population has declined by 1000 in the past four years which means the needs have increased as more has closed. (governmental response is driven by numbers and not by need; story of post office and schools closed and  planned bus service). DOWNSTREAM IS UPSTREAM.

5. VOTING LEADS TO CIVIC HEALTH; CIVIC CONNECTION LEADS TO PHYSICAL HEALTH. Lowest voting turnout in the metropolitan area. My precinct 20 percent turnout average; precinct at All Souls est 50 percent. Highest percentages of people of color in precinct lowest turnout areas. Disparities of numbers of precincts and access to polls and to candidates and officials. 7 precincts in all four zip codes covering all or part of our area compared to 8 in the 74114 and 15 in 74133. Working with UCO and LWV and others on statewide analysis and response.

for the GardenPark and Orchard: finish the greenhouse, add aquaponics and kitchen; construct the 2100 sq ft hoop house; expand the Children’s Garden; construct a stage, a deck, and a shade area, begin community outdoor art and music, Create community engagement areas, service learning outdoor classrooms, Launch the annual Grow Pots program to help families at the food store to grow their own food at home. Help people start smaller gardens on abandoned lots in their neighborhoods. Become a site for education and entrepreneurs. Partnering with OU Graduate Design Studio again on plans.

for the Community Center: Finish the Community Room in the south building for the free bookstore, computer area, classroom, kitchen, meeting space, laundry; move and expand the art rooms and studio and create a gallery in the Central Building; expand the food store with a third room for shopping and added storage; Finish the outside Permaculture Flood Management Project, and outdoor deck and gardens and benches and small hoop house. Reconstruct the basement into permanent and temporary residences.

For the Wider Community: Through expanding retreats, Help others begin place-based, relational renewal initiatives in other parts of the area, and elsewhere, that focus on “relocation to abandoned places (teaming with remainers, returners, relocaters), reconciliation through repentance and reparation, and redistribution of goods and the common good.”

A Note about the Image Accompanying this Post: In the summer, 2016 we hosted an intern, Leidy Rogers, from the College of Social Justice; she took as her project making community art and placing it in the community in places of high visibility and high blight, to show the world that beauty resides in our community even in its bleakest spots. This was one of those.
Posted by Ron at 7:51 PM

Be A Giver and Grower

Ron
Feel free to email me at RevRonRobinson@aol.com