Our Property Fire, Our Missional Transformation Space Plans in Its Wake 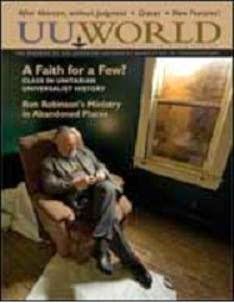 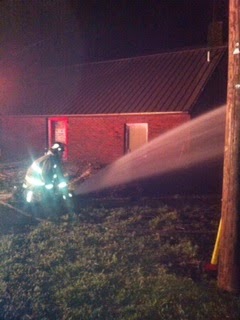 Three years ago our ministry was featured in the cover story of the Unitarian Universalist World Magazine; the artwork was a photograph taken inside the "old parsonage" of the abandoned church we were hoping to buy at the time in order to move our community center, clinic, food store, clothing room, etc. to the much bigger space; we had dreams of using the old parsonage, fixing it up drastically, and letting people stay in it who came to work in our area with us, or maybe using it as a garden center, showing how such houses in our area could be beautified for the neighborhood. We were able to buy the property even though before we closed on the property ownership itself the main building was greatly vandalized for the first time in its 90 year history even though it had been used by squatters for some time. The old parsonage began to be used as a storage area. We had a decision to make right away: work on fixing up the buildings, repairing the damage from the vandalism, and then open to the public, or clean up and get right to serving others in and through our damaged buildings. We, of course, chose the latter approach.

The other night some squatters during the night who were using the old parsonage caught it on fire, intentionally or unintentionally could not be determined though there had been fires off and on in abandoned buildings in our area recently. It burned quickly and thoroughly. Thanks to the effort of our partners, the volunteer fire dept. and the Tulsa Fire Dept and our neighbors the fire did not spread much to our main community center building, the old brick church, though one door was damaged by heat and the fire dept effort.

Now we are in the midst of trying to raise funds to remove the rubble from the old parsonage fire; and we are dreaming of what might come from this event that can help us continue to transform our zipcode which is the lowest life expectancy zipcode and one of the poorest in our Tulsa area. We are envisioning an expanded "third place" outdoors area that would be a free public place of and for community even when our building is closed; we have boosted wifi so it reaches there; we have and will expand outside electrical outlets so people can charge their cell phones if their electricity is turned off; we have an outside hydrant that people can use to fill up jugs with our water to help at their homes without running water. We plan to create a wonderful outdoors garden deck area. We have already begun on that side of the building with a permaculture project that will help with flooding and create rain gardens and more outdoor spaces to become more hospitable even when we are open and overflowing indoors.

We need your help to be able to pay to get the remains cleared off and to replace it with the new deck and other amenities. $5,000 is our goal for this particular project.

That photograph of me inside the old parsonage even before we owned it captured the essence of our deep mission to bring a peaceful presence to lives filled with scarcity and anxiety.
Posted by Ron at 7:39 AM No comments:

A Quick Look at Our Area 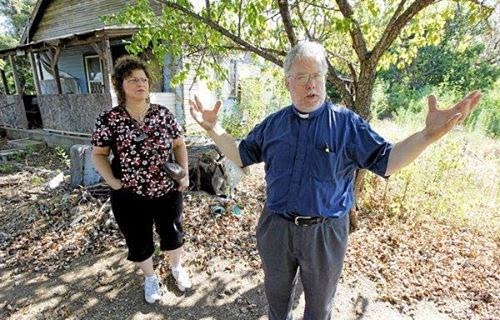 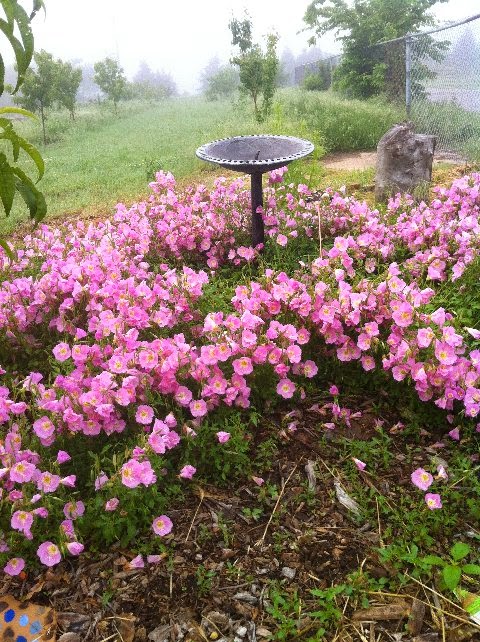 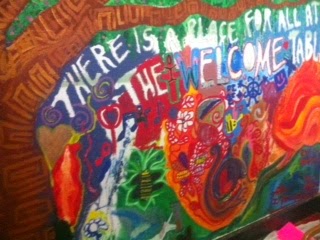 Quick Look at the 74126 McLain/Turley Area
46th to 76th St. North
Thank you to all who are living, or have businesses, or who come to work here who are showing the strengths we have and are keeping the community spirit alive despite the statistics and the stories and the struggles listed below.

5.     Historical Abandonment: current 40 percent of vacant homes are abandoned, not for sale or rent; McLain Shopping Center, Northridge Shopping Center, Suburban Acres Shopping Center once thriving now virtually abandoned; in 2011, three elementary schools in the zipcode closed (one more in 2012 when a public charter school was started); the post office was closed. One community pool threatened with closure this year. Lack of public transportation options available elsewhere. Gap has grown between neighborhood residents and their elected officials who now serve area some five or more times larger than before.

6.     Roughly 50 percent soon will be under 18 and more than 60 years old. Projection for 2015: 12,590 residents, 73.4 percent African-American, 15.6 percent white, 7.3 percent American Indian and other; 3.5 percent Hispanic. In our service area split between incorporated far north Tulsa and unincorporated Turley, white population in Turley will remain slight majority in 2015 but down to 52 percent. College graduates: 7.6 percent.

7.     Cultural Change, 1967 to 1987: white working class (with professional and business owners living in area as well) changed to predominantly black working class and then to rising underclass. Racism of segregation led to racism of “white flight” (and flight of business owners, professionals, service providers who worked in area but lived elsewhere), and drop in job availability for those who lived here who often have to leave area to get work, and drop of services private and public, and switch from home ownership to rental.

Be A Giver and Grower

Ron
Feel free to email me at RevRonRobinson@aol.com